Today I raced in the Seal Beach Rough Water Swim 5k. Though I have done other swims of similar length, this was my first race this season and the first one where I had a paddler supporting my swim. In this case, having the paddler (my friend Nikki) there made the swim not only way less navigationally taxing but also far more enjoyable. I was able to focus on swimming hard while relying on the paddler to keep track of the buoys at all times. While I generally play music in my head while I swim, not having to worry about navigation made this far more doable. 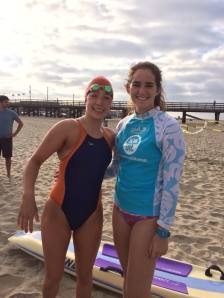 My amazing paddler Nikki and me 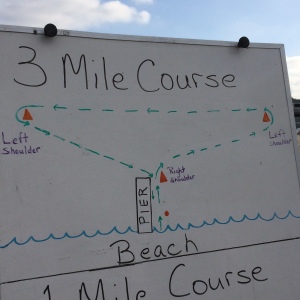 For the first leg of the swim, I had trouble getting my rhythm and didn’t have a song in my head. But as soon we passed the pier on the way to the third buoy (see map above) Bon Jovi’s “Livin’ On A Prayer” started to play and helped me pick up my tempo and attitude. Sometime later, for an unknown reason Hilary Duff’s “So Yesterday” made and unexpected appearance and helped me to keep pushing toward the third buoy. As I was sprinting around the pier toward the shore, I was greeted with “Magic To Do” from Pippin and Foster The People’s “Pumped Up Kicks” which encouraged me to swim the last leg with all I had left. Now, I am not a huge music fan but having these songs in my head always help me swim my best.

Goofy photo of me before the swim