I have had a (much needed) good night’s sleep to let it sink in that I have finally achieved my goal to swim across the Catalina Channel. Ever since 12-year-old me read Lynne Cox’s Swimming to Antartica, I have wanted to follow in her footsteps, and now I have! I am so honored to finally be part of the “secret club of crazy people” aka marathon swimmers! The immediate lead up to the swim was a mix of equal parts relaxed and very tense; relaxed because all the preparation was complete but tense because of the upcoming swim.

Some of my team

We arrived at the dock around 7pm on Sunday, had dinner and began to load Outrider with all our supplies. The crew was super helpful and relaxed even though they had a just returned from a fishing trip. I was very greatful that they dumped their bate buckets before we left the harbor. As we were pulling away, we received a briefing from the captain followed by a briefing from Dan Simonelli, one of my Catalina Channel Swimming Federation official observers. Dan read the CCSF rules and reviewed the roles for everyone on my team. My team consisted of my crew chief Rebecca, my mom Natalie, support swimmer Paige, Paige’s dad, and kayakers Maddy and Jax. After the briefing, I went down to the bunk room to get a few hours of sleep as we motored to the island. 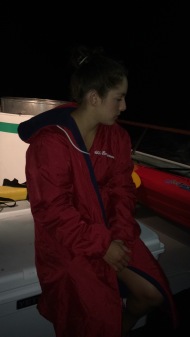 Waiting to arrive at the island.

My cousin Maddy came down to wake me when we were 45 minutes from the start and those 45 minutes were some of the most nerve-wracking of the whole endeavor.It was pitch dark as Catalina came into view, and I focused on staying warm and preparing mentally. Paige and Maddy helped me get covered in grease (I use a mix of Vaseline and lanolin) and then I put my cap, goggles, glow sticks, and lights.

Putting on my grease

Suddenly it seemed like everything was moving really really fast; one minute I was in my bunk sleeping, then next minute I was about to jump into dark water. Looking at the dark island from the boat, I had many thoughts going through my head, including “What am I doing?” I needed to constantly remind myself that I was prepared and ready to swim.

When I went to the edge of the boat, my kayaker Jax was already in the water waiting for me. I psyched myself up and jumped in with both feet, holding my goggles to make sure they didn’t fall off. I followed Jax into Doctor’s Cove and pushed myself over the swim rope to get to the beach. The water was dark but clear and the sandy bottom with kelp swaying was eery with shadows. I took a moment at the beach to focus and then raised my arms to signal that I was starting. At 11:37pm, I walked quickly into the glassy water and almost immediately swam straight into the swim rope, having completely forgotten about it. It was hard to see anything in the dark so I had to trust Jax to lead me in the right direction. 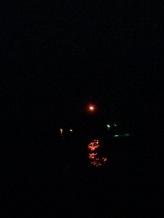 Jax is in the kayak. I am the two green lights in the water.

Within ten minutes of entering the water, I received my first of many Jellyfish stings, this one to my ankle. I was certainly glad that Rebecca had given me a cream called SafeSea to minimize the stings’ effects to my body. I swam through the night with the lights from the boat visible on one side and the glow sticks from the kayak visible on the other. At first, I struggled to keep a straight course and kept zigzagging between the boat and the kayak, but eventually got the hang of it. The half hour between starting and my first feed dragged on; I kept thinking that if this was how long 30 minutes felt, how was I going to do many many hours? I had gotten a little nauseous on the boat over and one way I motivated myself was by reminding myself how much I would rather be in the water then on the boat. Finally the moon came out and made the water a little brighter. One really cool part about swimming in the dark were the bioluminescent organisms that lit up the water. There were large salps, but also tiny things that made seem like I was swimming over a starry sky. I had to figure out how to feed in the dark, but after a few tries Jax was able to easily let me know it was time to feed without blinding me with the headlamp.

Swimming with Jax just as it began to get light.

I had read that one of the most mentally challenging parts of the Catalina Crossing is how long it seems to take for the sun to rise, and I can now say that this is very very true. The last two hours of night were very tough for me; partly because of the dark and partly because I kept thinking about how much more I had to do. When the sun began to rise around 5 in the morning,  my outlook brightened with the sky. At my 5 and a half hour feed, I was told that I had swum about halfway across the channel and the Paige would be joining me in the water at my next feed!

As soon as Paige jumped in, my pace improved and I was happy to be swimming with a friend, just like during my training swims. Around the time Paige hopped in, Maddy joined us in the other kayak and Jax went back to the boat to rest. At the 6 and a half hour feed , I asked for the feed I had prepared with children’s Advil because my body was just plain starting to hurt. I normally don’t like the taste of kids medicine, but the watered down berry flavoring was actually a nice change from my plain feeds and made a real difference for my pain level. I was sad to say goodbye to Paige at the 7 and a half hour feed, but knew that she would be joining me later and the anticipation would keep me going. 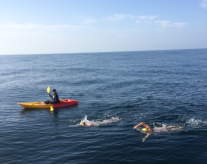 Swimming in daylight with Paige!

At the 8 and a half hour feed, Paige hopped in again and I changed my goggles because the sun was really starting to bug me but then ended up swimming for a whole half hour with completely fogged goggles. As a result, I had to switch again at the next feed but then had no more problems. I was also told that I had just under 5 miles left to go! By this point, my shoulders were starting to bug me and I was feeling very ready to get to the beach, but I knew I still had a way to go.

At the 9 and a half hour feed, I was hoping that I was getting close and made the mistake of asking how much farther I had to go. Rebecca told me I had about 2.5 miles left, which was more than I was hoping to hear at that point. Those last few miles seemed to take forever and I wondered at least once if I was ever going to get the beach. Paige began holding up signs with encouragements and Kim-isms (our coach’s sayings) and Maddy made funny faces at me to keep me going. Since it was light out, I was able to see the faces of my team on the boat and I felt like they were swimming along with me.

A snowball rolling down a hill is one of my favorite Kim-isms.

Finally, at the 11 hour feed, they told me I was almost at the beach and that this was my last feed. Paige hopped back in the water and Jax got back into the kayak to guide me to the beach. Jax went ahead to scout the best course and Paige and Maddy stayed with me. I swam into the beach and could see a crowd gathered on the cliff above. There wasn’t much surf, but the I was very careful to avoid slippery rocks, as I was unsteady from swimming for so long. At 10:48, I cleared the water and raised my arms to tell the observers on the boat that I was done. I swam the Catalina Channel in 11 hours 11 minutes and 24 seconds.

Raising my arms at the finish.

My mom Kim and a whole crowd of friends and family was waiting for me along with a reporter from CBS news. I was so happy to be finished but also sort of numb to my accomplishment. When you have been swimming for that long, your body feels like you should just keep swimming. I turned around on the beach and just took a moment to let it all sink in; I had finally achieved a dream I have had for over 8 years.

At that point, things started to move really fast. I swam back to the boat with Paige and was helped on board. Someone wrapped a towel around me, the kayakers boarded and just like that we headed back to the dock. As we rounded LA Light, I caught a glimpse of Cabrillo Beach, where I work, which was kinda cool. When we got back to the dock, we took a few photos as a team and headed home. 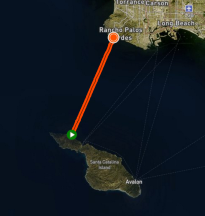 The track of my swim.

I am so happy to to have finally achieved this goal that I have had for so long. Swimming from Catalina has always been one of those things that I have seen other people do and always said I wanted to do and it is hard to believe I actually have. I am so grateful to my team for everything and truly believe that they got me through the toughest spots. Thanks to everyone who watched me, cheered for me, sent me thoughts, or helped me at all, I couldn’t have done it without you!

My team after the swim!