I’ll start off by saying that I didn’t know what to expect with this swim, but that it turned out to be the most fun marathon swim I have ever done! On Saturday at 6:45am, my parents and I headed to the North Shore Cove, down in Battery Park. I knew that this was bound to 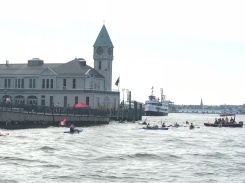 Swimmers and kayaks gather in the Hudson at the start.

be a “hurry-up-and-wait” situation, but NY Open Water did such a great job of making sure everything was running smoothly! I was given lucky number 13 as my race number and by 8:00 we were loading the boats. Our boat was called the Bella Vista and it was the nicest escort boat I have ever had for a swim.

My splash time was 9:20 so we motored over to the start at Pier A and I waited for the signal to jump in and get towed to the start on a jet ski. the observer briefly outlined the landmarks that I would pass along the swim and things I might experience. She told me that many people didn’t enjoy swimming in the Harlem River and that I should not let that discourage me. I jumped in and ended up having to tread water for a bit while I waited for the wave of swimmers before me to start.

The water in the Hudson felt pleasantly cool and cleaner than I expected it to be. My kayaker, Agnes, told me that it was time to start, so I began swimming with the city on my left and Agnes in the kayak on my right. I had only swum around one pier when Agnes told me that we needed to stop and wait for a ferry to pass. I was a bit annoyed that they couldn’t have just had a us wait at the start but I also trusted the organizers and knew that stops for boats is just the way of this swim. The ferry passengers waved down to me as they passed.

We continued around the bottom of the Battery, buildings towering above us on the left. Agnes and I turned into the East River, and I began to feel the strong current pulling me up the river. I saw the Brooklyn Bridge (1)

looming ahead of me and decided to play a game with myself and see if I could count all 20 bridges. I couldn’t see any other swimmers or their boats and felt alone in the water. The Manhattan (2) and Williamsburg (3) Bridges came up quickly and I tried to find my rhythm in the choppy water. I felt stings in my suit and was surprised that there were sea lice in the brackish water. I searched the Manhattan skyline, waiting for the United Nations building to mark that I was passing Midtown. It took awhile to pass the Queensboro Bridge (4) and the river

narrowed as we veered left to round Roosevelt Island.

As we continued up the East River, I felt like Agnes was herding me toward the wall to my left, and I later learned that she was following directions from her radio. I was feeling very stressed at this point because I had just taken my 3rd feed, which meant that it was approaching 11:00am and I knew I needed to pick up my pace to to make the tidal change at Hell’s Gate. I told Agnes that I was going to push my pace a little, and asked her to tell me when I could relax. The sprinting helped me find a rhythm a little, but I still felt generally terrible as I swam under Ward’s Island Bridge (5) and into the Harlem River. It took me about 2 and half hours to reach the Harlem River and I must have passed Mill Rock around this point, but I didn’t notice, I was just felt so relieved to have made the tidal change.

Up to this point, all I had been thinking about was “make the tidal change,” because I knew my swim could end at only 2 hours in if I missed this crucial point, so once in the Harlem, I allowed myself a minute to mentally regroup.

My observer had warned me that the Harlem can feel like a slog as it is far less current-assisted than the East River, and I certainly felt this as I began to make my way through it. However, as I continued down the river, the flat and calm water allowed me to stretch out my stroke and for the first time in the swim I felt good and strong. During this part of the swim, the Harlem River is fairly narrow and I could see three bridges (6-8) close together when I sighted forward. It was so much fun to swim under the bridges and was a good confidence booster to feel like I was making progress quickly. I felt a little bit like I was swimming under bridges in a fairytale river straight out of Disneyland. I had fun counting bridges (9-18) and felt strong and smooth in the water.

Swimming under many bridges close together in the Harlem.

I began to see other kayaks and escort boats around me periodically, and tried to pass any that I could see. The water in the Harlem was certainly warmer that the East River, but I never felt uncomfortable and the water was far cleaner than I expected it to be.

Feeding in the Harlem

When I passed the 5 hour mark, I allowed myself to act as though the swim was halfway through because I knew the flood tide in the Hudson River would occur around 7pm (9 hours and 40 minutes of swimming).

Around this point, the river widened out and we turned and passed under the Spuyten Duyvil Bridge (19) and into the Hudson. This bridge was so low that I could have touched it if I wanted to and the escort boat had to veer right to a open part in the bridge, where it was under construction. The chop in the Hudson hit me like a slap in the face compared to the calm Harlem and the water was beautifully tree lined on both sides. 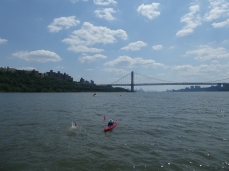 Entering the Hudson with the GW in the distance.

I could see the George Washington Bridge (20) ahead of me but didn’t let myself get too excited, as I had been warned that it is farther away than it looks. At the same time, I couldn’t help but pick up my pace a little and try to find a new rhythm in the choppy water. There were swimmers and escort boats all around us now, and I had fun trying to catch up to and pass other swimmers. I was looking for the Columbia “C” but never saw it.

I never did see the Columbia “C”

I finally passed under the GW Bridge and realized that I had not done a good job of studying landmarks on the West Side of the city.

Passing under the GW and by the Little red Lighthouse.

Agnes told me that the GW was around 200th street so I had that as my only reference of where I was. I kept pushing on and playing with my pace, and soon I started passing piers on my left. I still felt very strong at this point and was thoroughly enjoying flying down the Hudson, even though I was swallowing water on the majority of my breaths. Agnes signaled to me that I needed to swim into a cove on my left and let a cruise ship pass. I was disappointed to have to waste time floating but was also grateful for a few minutes of rest.

After waiting for the cruise ship.

I floated for about 6 minutes next to Pier 96, along with another swimmer right near me and two more ahead of us. I asked Agnes about how much longer she thought we had left and she told me about 4 feeds which I took to mean 2 hours. I thought we were closer than that but quickly shook off my disappointment. Agnes told me that I should take my 6 and a half hour feed while we waited, and soon we were back on our way down to the Battery.

I counted the piers I passed and caught a few more swimmers, as Agnes and my support crew cheered me on. I could see the Freedom Tower just ahead of me to my left and knew that I was getting very close to the end. I saw a safety jet ski pass very close to me and wondered if I was nearing the finish even though it hadn’t been 2 hours. Regardless, the clock tower marking the finish was visible just ahead of me and I started to sprint. I couldn’t remember exactly what point I needed to pass to finish the swim, so I decided to just keep swimming until someone stopped me.

Agnes raises her arms to tell me that I have crossed the finish line.

Eventually Agnes turned to cut me off and said “Abby you’re done! You did it!” I climbed onto the jet ski and he took me over to the river wall to say hello to my mom and my teammate Meri, before giving me a ride back to the boat.

As soon as I was back on the boat, I exclaimed, “That was so much fun!” and I had a huge smile on my face. The observer told me that I had finished in 7 hours and 42 minutes and I was thrilled to have completed the swim in under 8 hours.

I think I can say that this was the most fun I have ever had during a marathon swim. I am so grateful to all the people who helped me make this swim a reality, especially my parents, my coach Kim, all my swim buddies, my amazing  kayaker Agnes, and all the incredible people at New York Open Water!