With our bags all packed, my family and I drove to Mala ramp to meet the boat and begin the swim. When we arrived, they were just lowering the boat into the water and I put on sunscreen and grease while they got everything else situated. My sister Jenna took the time to exclaim, “Abby, I am so glad I get to come with you on this swim, but f**k you for making me wake up at 5:00am.”I had a quick talk with the boat captain, Justine, and told her that I prefer to swim along side of the boat rather than following behind. next thing I knew, I was standing on the beach beside the ramp and slipped into the water to begin my swim.

Standing on the beach before the start

I swam past the harbor entrance and kept sighting the boat to swim up along side it. I swam over a few turtles and imagined that they were wishing me good luck on my swim. For the first half hour, I played catchup with the boat, and it seemed like every time I got remotely close, the boat would speed away from me again. At the first feed, I asked the captain if she could slow down and let me swim beside her and after that I was much happier. During the second half hour, my stroke started to stretch out and the conditions were relatively calm. I periodically felt mild jellyfish stings and I joked to myself that this was the ocean taking revenge for the very few I experienced in the English Channel.

Up until around 1.5 hours, I could clearly see the bottom beneath me and then suddenly I was far enough out and all I could see was blue. For the next 2 hours, my stroke remained steady and I was pulling good water and feeling great. At the 2.5 hour feed, my mom told me that I was

halfway to Lanai and I kept swimming strong with music playing in my head. The 3 hour feed came far more quickly than I expected and I was told I had already covered 6 miles and was on pace for a 4.5 hour swim.

I continued to swim for about 10 minutes, staring into the blue and humming to myself when I noticed a largish grey shape swimming by far below me. I blinked a few times to make sure I wasn’t seeing things, my heart racing as the shark cruised by. I quickly swam to the boat and told them that I saw a shark, my heart pounding in my ears. Justine called me over to the side of the boat and told me to look around and see if I still saw it and asked me if I wanted to get out and end the swim. I didn’t see anymore signs of the shark and opted to keep swimming, with the team on the boat on full alert looking for fins.

I kept swimming, but couldn’t seem to calm myself down. My arm tempo was good but I wasn’t pulling any water and I could tell I was going nowhere. I was so nervous, but seeing the boat team staring out at the water was helpful. I began to feel the adrenaline fading and my energy was slumping and I was still going nowhere. the waves and wind picked up and I felt a bit washing machined. I continued to make little progress and at each feed was told that I was 3 miles away. After the swim, I found

out that at some points during this 2 hour stretch, I had actually gone backward. This part of the swim was probably the toughest spot I have ever been in mentally during a marathon swim. I kept thinking to myself, “how am I going to swim around Manhattan if I can’t even cross this 10 mile channel?” At the 4.5 hour feed, my mom asked me “what do you want to do?” and I said “keep going.” This made me think of the story of Gertrude Ederle‘s channel crossing where her response to her trainer tell her to get out was “What for?”

I started thinking that if I was still making no progress when I hit 6 hours, I would consider calling the swim. This, in part, helped motivate me to dig a little deeper and I began to pull a bit more water with each stroke. At the 5.5 hour feed, my parents told me that I was making good progress again and had less than 3 miles left to go! I kept pushing forward and I could finally tell that I was getting closer to Lanai. I thought about all the swimmers who inspire me. I thought about my training buddies Rebecca and Gino and how I knew they were cheering me on.

I thought about Lynne Cox and how she pushed through much rougher conditions than I was facing. I thought about my friend and teammate, Paige, pushing me forward. All these people helped me get through the rough parts of this swim. With every breath to my left, I saw this little green fish painted on the side of the boat and imagined it cheering me on.

At the 6 hour feed, I was told that I had less than 2 miles to go and I pushed on. As the swim got longer, I kept reminding myself that if I chose to get out, I would have to come back and do it all over again and this helped me stay motivated. At the 6.5 hour feed, I could see that I was really close and I asked if there was a particular landing spot I should 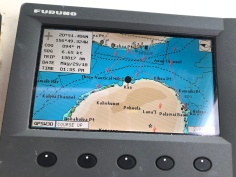 aim for. Justine responded, “just get to shore!” And I turned to swim straight into shore. I left the boat behind and swam over a reef. The water got shallower and warmer and in front of me I could see waves crashing over another reef. I carefully swam over the break and found myself in a shallow rocky area. I picked my way over the rocks and finally cleared the water and turned to face the channel that I had just crossed.

Most marathon swims are really a team effort, but this swim in particular would not have been successful without my parents, my sister, the amazing boat crew, and all the people (near and far) sending me their support. This swim was far tougher than I expected it to be and certainly tested my mental toughness. I am so grateful to everyone who cheered me on and glad that I was able to accomplish this goal.