Even though I now live in Chicago, I could not resist a trip un to Santa Barbara to compete in the Semana Nautica 6 mile swim! Usually, my mom and I make a weekend of this swim, but this year I just drove up to Santa Barbara with my friend and kayaker, Jax. The drive was surprisingly easy and we decided to park at the finish at Arroyo Burro Beach and take an uber up to the start at 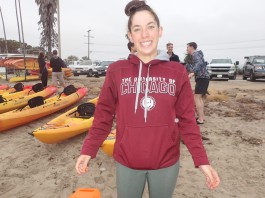 Goleta Beach so that we would not have to deal with the car at the end. We arrived very early in the morning and picked up our rental kayak with plenty of time to get ready for the swim.

Even with more race entrants than ever before, the check in process was smooth and they marked both my hands with my race number. The weather was foggy and cool so I decided not to get in

the water to warm up early before the race and instead went for a warm up jog on the beach. Soon, the kayakers were entering the water and we were lining up on the starting line between two flags.

The race director started the race and I ran into the water and dove through a wave and started swimming to the first buoy. In past years, the race course only had us rounding the pier, but this year we had to go all the way around a buoy and it felt like I was going to swim 6 miles before even coming close to the buoy. Jax had told me that she would wait for me on the left side of the pier after rounding the buoy. By following these directions, it was surprisingly easy to find Jax after

the buoy and we started off down the race course. By this point, I could count 5 people ahead of me and at least one female competitor. I tried to stay ahead of the people behind me and not worry about the swimmers ahead of me. The water felt cool but not uncomfortable and I focused on maintaining a strong pace to set myself up to build the second have of the race.

Soon, Jax was signalling me to stop for my first feed and while I was drinking, she told me that I was swimming strong and I was currently in 6th place and the 2nd woman. The water continued to feel cool, but my body felt warm and relaxed and I was just thoroughly enjoying myself. The water was not as clear has it had been in past years, but there was also not as much kelp to swim through, so that was a plus. Jax pointed out the halfway point to me and we stopped for a minute to make sure that the lifeguards were able to get to the swimmer next to us who was signalling that he was too cold to continue.

After we passed the halfway point, I tried to build up my tempo and continued to feel strong and relaxed. After the initial sprint to the buoy, I pretty much didn’t see many other swimmers, but the race course was wide enough that they could have passed me without me realizing. I could see the dip in the coastal hills that marked the finish but could not really tell how far away I was 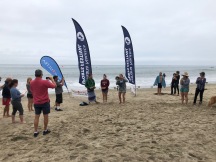 from the last buoy. Jax signalled a feed and while I was drinking she told me that I was less than a mile from the finish. I picked up my pace and headed for the buoy. Soon, I could see the buoy getting closer and started sprinting. I rounded the buoy and sprinted into the beach. I ran up the sand and past the finish flag, where the race director put a shell necklace around my neck. They told me that I was the

This race is always my favorite organized swim and I am so happy that I was able to participate! My place was pretty much set after the initial sprint and stayed the same throughout the whole 6 miles! This race was a good confidence builder for me, both in terms of colder water and racing pace! I am very grateful to Jax for supporting me throughout this swim and always!