This weekend my mom and I headed down to Lido Key in Florida, so that I could swim in a race around the island. This race was a warm water 7-miler and a perfect way to start my open water season! My mom and I met up in the Tampa

airport and drove down to Lido Key, which is near Sarasota. Not only was I excited to get to compete in a beautiful warm water swim, but I was also thrilled to get to spend the whole weekend with my mom! When we arrived at the hotel, the wind was blowing at 15 mph with gusts of 25+ and the water looked angry. Although we hoped it would calm down by morning, I was worried that the race could be cancelled due to poor conditions.

By Saturday morning, the wind had mostly died down and the ocean looked much happier, though still not calm. We drove out to the start and met up with my kayak escort, Pat, and the other race participants. The women’s race started at 10:05, 5 minutes after the men. Although I do appreciate the diminished chaos provided by wave starts, I do hate spending the first half of the swim catching up to and passing

the swimmers in the wave ahead of me. After the starting gun went off, I had a hard time finding Pat, but once I did, we were off and heading for the first bridge on the course. The swim started on the island’s northern corner and we started to make our way clockwise. During this early part of the race, I just tried to position myself well and get into a rhythm.

I had my first feed right after I passed under the John Ringling Bridge. At this point in the course, the water was very shallow and my fingers brushed the muddy, weedy bottom on each stroke. I think maybe the buoys were blown inland by the winds. I was grateful during this stretch that I am fairly short, because if I was much taller, it would have been very difficult to swim in the shallow water. I was spread far enough from any competitors that I wasn’t really racing at this point, but I focused on finding my rhythm and trying to keep a consistent distance (not lose ground) from any other kayaks that I could see.

Just over an hour into the swim, Pat and I approached bottom corner of the course and I could see breaking waves ahead of me. I pressed forward, feeling myself lifted by the smaller waves and diving slightly under the larger ones. At this point, the water turned from muddy green to bright blue and I knew we were moving into the open ocean side of the island. After we passed the waves and came around the corner, I felt the ache in my arms from pushing through the rough patch.

This part of the swim, along the long stretch of white sandy beach, was by far the most beautiful and I started to really enjoy myself. Even through my dark tinted goggles, the water, sand, and sky were so bright. The shore curved away from us and I couldn’t tell where the turning point would be, as the beach seemed to stretch on forever. Suddenly, Pat called to me that there were breaking waves ahead and the water began to get very shallow. I was getting buffeted by white water and feeling disoriented. When I see surf, I try to get out past it so I started swimming perpendicularly away from shore, but the water kept getting shallower. 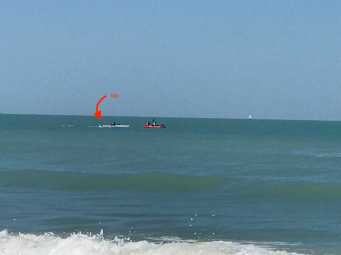 Swimming along the beach

Finally, I realized that Pat was trying to motion me back toward the island and I decided to trust her even though I was totally confused. Eventually I realized that the waves I had seen were breaking over a sandbar and there was actually a deeper channel between the sandbar and the shore. I felt dumb that I had wasted time trying to “get past” the surf and tried to pick up my pace and make up the lost distance. I also really regretted not studying the course map more closely before the race.

We came around the corner and finally left the long stretch of beach, and I wondered how much of the race we had left. I saw a swimmer up ahead and pushed myself to try to overtake her Even though I knew there were at least several female competitors ahead of me, anytime I saw a pink-capped swimmer ahead of me, I pretended that she was my only barrier to winning the race and this helped increase

Running into the finish

my motivation. Soon we approached another bridge and the course narrowed ahead of us. Pat stopped me to give me another feed and told me that she thought we were almost at the finish. I decided to pick up my pace a bit and caught up to another swimmer. We swam next to each other between our two kayaks for a bit and began to approach another swimmer. I broke away from the first swimmer and focused on catching up to the girl in front of me. I sighted in front of me and could just barely make out the yellow buoy marking the finish shoot and continued to push past my competitor. I was able to keep building me speed and sprinted past the girl and approached the finish shoot. I swam until my fingers scrapped the mud and stood up to run through the shoot.

and 14th out of 69 total individual competitors. Although I am frustrated that my navigation cost me some distance, I am generally happy with my performance in 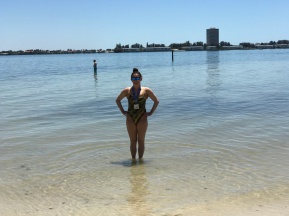 this early season race. I certainly learned a lot about how good navigation can become instrumental to a strong finish. Overall, this race was a very fun way to begin my open water season and quite well organized and managed. I will need to come back someday \and see if I can improve my race plan and performance!